A training day for the Cochrane UK Trainees

On 29th November 2019, we welcomed eighteen trainees to the Cochrane UK office for a training day featuring talks and workshops. The attendees were members of the Cochrane UK Trainee Advisory Group (CUKI-TAG), who each also invited a colleague to attend.

The CUKI-TAG is a group of UK qualified junior doctors and dentists, launched in 2015 in order to foster links between these groups and Cochrane, understand why and how trainees might engage with Cochrane’s work, and ultimately to promote evidence-informed practice. It currently includes 13 members from a variety of specialties including – but not limited to – gynaecology, anaesthetics and paediatrics.

The CUKI-TAG began the day with their annual face-to-face meeting, after which everyone was welcome to join a programme of talks designed to offer practical insights.

Martin Burton, director of Cochrane UK, began by giving an overview of Cochrane, Cochrane UK and Cochrane Reviews as well as sharing a number of important reminders, such as why it's important that trials are double-blinded.

Many of the trainees have plans to work on Cochrane Reviews, or have done so already, and so we were delighted to be joined by Toby Lasserson, Cochrane’s Deputy Editor in Chief. In an entertaining talk, Toby gave some tips about how to avoid a number of common errors in carrying out a systematic review and flagged some dangerous of the misrepresentation of evidence. 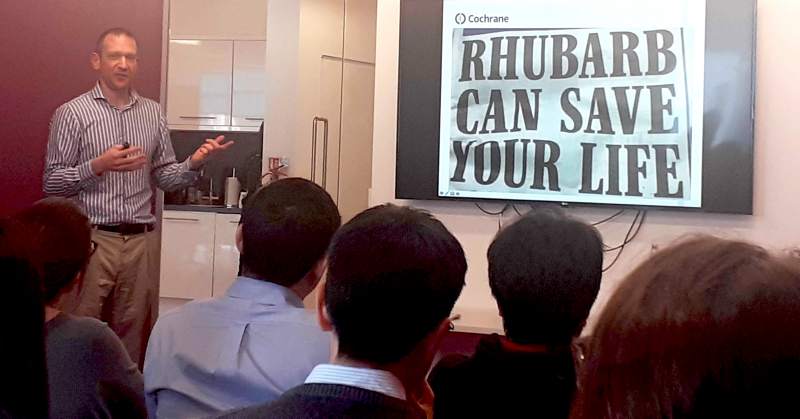 Up next was Lynda Ware, one of Cochrane UK’s Senior Fellows in General Practice. Lynda described a project that she’s been working on with colleagues, investigating claims of ‘no effect’ and ‘no difference’ in Cochrane Reviews. The talk highlighted some of the ways in which authors can confuse ‘absence of evidence’ with ‘evidence of absence’ and why it’s important to avoid this. To make her case, Lynda spoke about the invisible unicorn that Martin Burton claims has been hiding in his office, and why it’s been so difficult to prove him wrong... 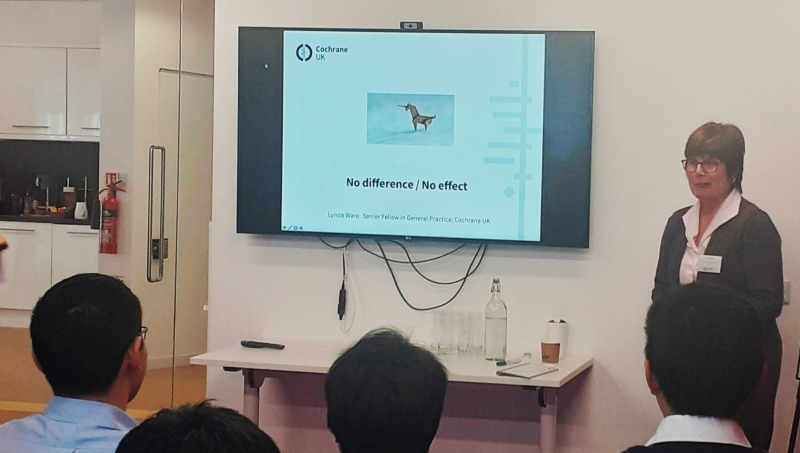 Emily Carter, the 2019/2020 chair of the CUKI-TAG, then outlined ways in which trainees can get involved with, and contribute to, the work of Cochrane and Cochrane UK. Emily also discussed the results of a Nationwide Survey of the Attitudes of Doctors and Dentists in Training Towards the Use of Evidence-Based Practice, carried out by former members of the CUKI-TAG. This survey identified key barriers to the wider adoption of evidence-based practice by medical and dental trainees.

Mohit Sharma, Cochrane UK’s Senior Fellow in Public Health, then led a discussion about how and why the trainees could run or contribute to journal clubs in their own workplaces, as one practical way in which the trainees could champion evidence-based practice.

The focus then turned to blogging. Firstly, Saul Crandon, one of the CUKI-TAG members, spoke about Students 4 Best Evidence (S4BE), a blogging site by and for students, supported by Cochrane UK. While he was a medical student, Saul wrote many blogs for S4BE and we are delighted that he’s maintained his involvement with Cochrane UK by going on to be a member of the CUKI-TAG.

The day finished with an workshop to get the trainees thinking about how they’d go about writing a blog about a Cochrane Review of their choice. Run by Sarah and Selena, the aim was to introduce the trainees to our new guide for bloggers, published in November 2019. This guidance is based on a new 18-item Checklist and accompanying guidance for disseminating findings from Cochrane intervention reviews published by Cochrane in the autumn of 2019.  The workshop provided an opportunity to reflect on some important aspects of disseminating evidence, such as extracting key information from a Cochrane Review, sharing that information in a clear, accurate, and sensitive way and communicating the (un)certainty of the evidence. 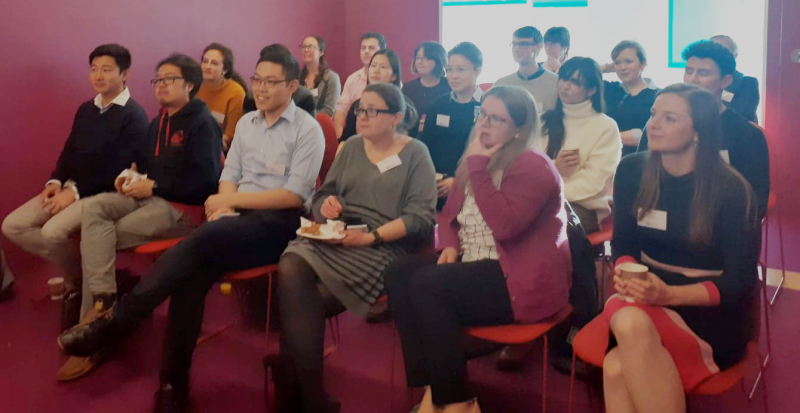 In six months, the trainees will be invited to complete a follow-up survey to help assess the extent to which they’ve been able to use and build on this training day in their daily practice. We hope that they left with a better understanding of Cochrane, of how to carry out a high quality Cochrane Review, and feeling enthused about championing evidence-based practice in their daily clinical practice.

Find out more and get in touch