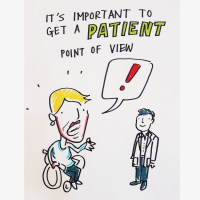 Cochrane UK is recruiting for the next cohort of consumer champions. The role involves advocating for evidence-based practice within patient communities and supporting Cochrane UK to work with more diverse patient groups. In this blog, Emma Doble and Marta Santos review the progress of the Consumer Champions project so far and explain more about the individuals we are keen to recruit.

Please note, applications have now closed (as of Wednesday 6th October 2021).  This page is now for information only.

In August 2020, we recruited our first Cochrane UK Consumer Champions: Brian Devlin, Ceri Dare, Olivia Fulton and Genna White. You can find out more about our current champions here and read their blogs here. Since starting the project, all the champions have been involved in a huge variety of work both within Cochrane UK and disseminating Cochrane’s work within their own communities. This includes:

As all of the champions were relatively new to Cochrane, they have also all spent time learning about Cochrane, evidence-based health care and patient involvement. The work they have been involved in has been determined by the opportunities which have come up at Cochrane, but the champions have also tailored the work and shaped the role, based upon their own interests and strengths.

Feedback from the champions on their involvement as champions has been very positive and, as they head into their second year in the role, they are now all focusing on more long-term goals on changes or support they would like to bring to Cochrane UK.

The Cochrane UK Consumer Champions project has been the first step for Cochrane UK in expanding its connections and work with consumers. This project has involved a lot of learning and development as part of the process. The champions have achieved an incredible amount considering the short time they have been involved in the project and with Cochrane.

Involving wider groups of consumers in Cochrane, and evidence-based health care more generally, is often sought and this project has highlighted how this can be done by involving consumers openly, supporting them through the work, and co-designing and delivering the things which matter most to them. As we conclude this first year of learning and reflection, we look towards recruiting a new group of champions to expand the project and create a second cohort.

Recruiting for our second cohort

As we recruit for the next cohort of Consumer Champions, our focus remains on recruiting patients or family members who are embedded within their own health communities.

We are particularly keen to recruit individuals who use YouTube, Instagram, or podcasts to engage with their communities.

Applicants must be based in the UK and able to commit at least 4 hours a month to the project for at least 2 years.

Find all the details of the role and how to apply.