Pharmacotherapy for hypertension in adults 60+ years

One of the earliest Cochrane Reviews on high blood pressure was first published in 1998, investigating treatments for the elderly. It was substantively updated for a second time in June 2019 and we asked the lead author, Vijaya Musini, from the University of British Columbia in Vancouver Canada to tell us about the evidence.

Our focus, therefore, is on the benefits and harms of using blood pressure-lowering drugs, rather than no treatment or a placebo in people aged 60 to 79 and over 80.

We looked for randomized trials that had treated and followed patients for at least a year and identified 16 studies that had recruited nearly 27,000 people aged 60 or more from western industrialised countries who had moderate to severe systolic or diastolic hypertension, or both. The mean age of patients was 73 years and their average systolic blood pressure was 182 mmHg and diastolic blood pressure was 95 mmHg. Most studies evaluated first‐line thiazide diuretic therapy for a mean duration of nearly four years. 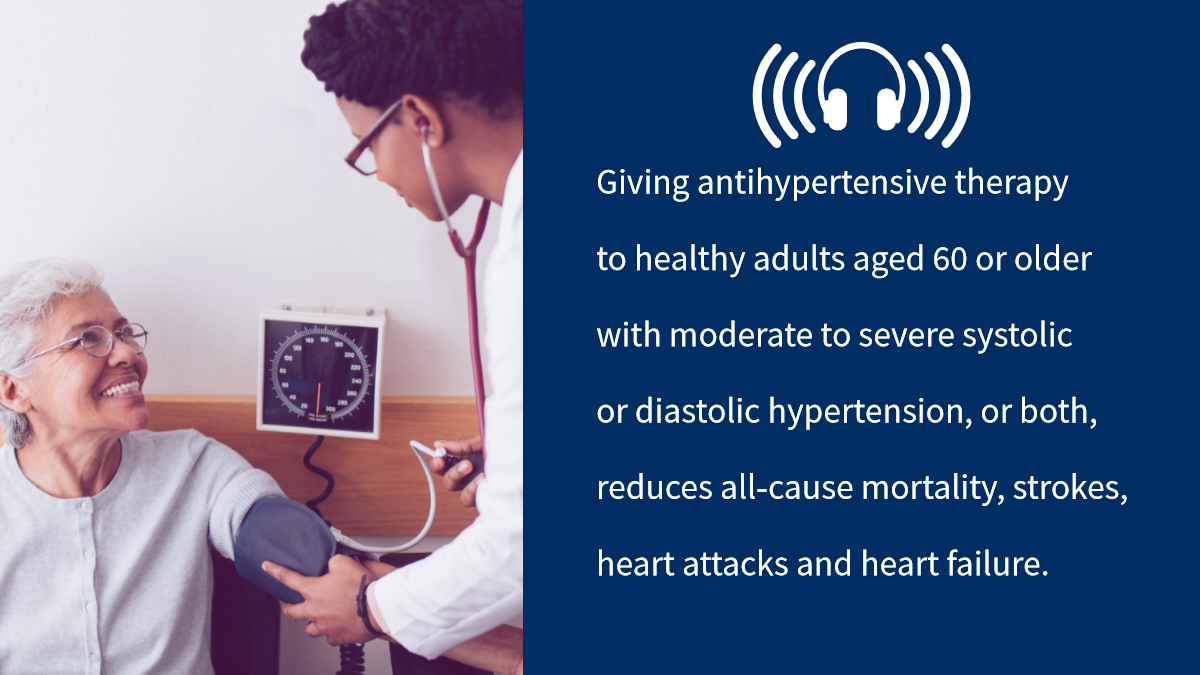 In patients 60 years or older, we found that antihypertensive drug treatment reduced the proportion of people who died from any cause during their trial from 11% in the control group to 10% with treatment. This reduction was due mostly to benefits in the subgroup aged 60 to 79 years. Overall, cardiovascular morbidity and mortality was reduced from 13.6% with control to 9.8% with treatment, primarily due to a 1.8% reduction in fatal and non-fatal strokes. The three trials restricted to people with isolated systolic hypertension showed similar benefits.

Patients given the drug treatment were much more likely to withdraw because of adverse effects, with 15.7% of the treatment group withdrawing for this reason, compared to 5.4% in the control group.

In summary, giving antihypertensive therapy to healthy adults aged 60 or older with moderate to severe systolic or diastolic hypertension, or both, reduces all‐cause mortality, strokes, heart attacks and heart failure. The largest amount of evidence of benefit relates to those people who have not had a previous cardiovascular event and who use a thiazide as first‐line treatment.